Neighbour Day should be every day 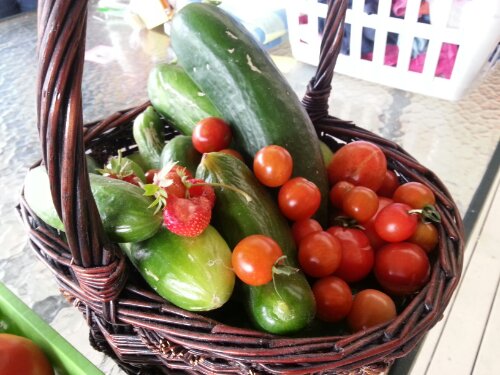 We moved into our current home last November in a different suburb of Canberra.

We’re gradually getting to know our neighbours. We have 4 houses immediately surrounding us.

Last week I happened to get home early from the office and was out in our backyard harvesting the latest crop of fresh vegetables from our garden when I heard voices over the back fence from some neighbours I hadn’t met yet.

They had just moved in only a few weeks before, and so I thought this is my chance!

I filled up a basket of fresh cherry tomatoes, cucumbers and various other fresh veggies, pushed down my feelings of nervousness, and called out over the back fence.

“Hi there, I hope i’m not interrupting but my name is…”.

I was very excited to let my family know who I’d met when they got home.

So how have are you going getting to know your neighbours?

I recently came across the Neighbour Day initiative. Have you heard of it?

Founded in 2003 by an Aussie, Andrew Heslop, after he knew something had to change when an elderly woman’s body was found in a Melbourne home and it had been there for 2 years. Yes, that’s right, she’d been dead for 2 years and NO BODY KNEW.

I personally find this hard to believe. But unfortunately it hasn’t been the only story, and probably won’t be the last.

It reminds me of a story Jesus told in the Good Book in a response to someone looking for a loophole in the definition of ‘neighbour’. You can read the whole story here.  Jesus goes onto share the story of the Good Samaritan. Someone who had every reason to leave an injured person by the side of the road, but instead expressed kindness and compassion in a practical way. This is exactly what I understand Neighbour Day to be about. And why I believe it should be every day!

Did you know Neighbour Day is now officially the last Sunday of March every year? So that means it was on Easter Sunday this year.

In other words it was just last weekend on that blissful extra long weekend we all enjoyed.

If you weren’t down the coast camping or away from home, did you even know it was Neighbour Day?

Well it’s not too late, because I think Neighbour Day needs to be EVERY day.

So what are you going to do today to get to know your neighbours?

And who knows, pushing past that nervous feeling when you first say hello could very well mean the difference between life or death.

And if you think of it like that, then what’s more important than meeting that neighbour right now?